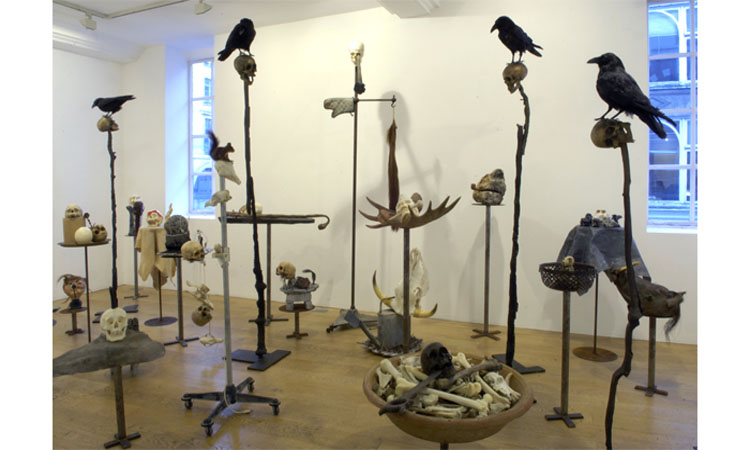 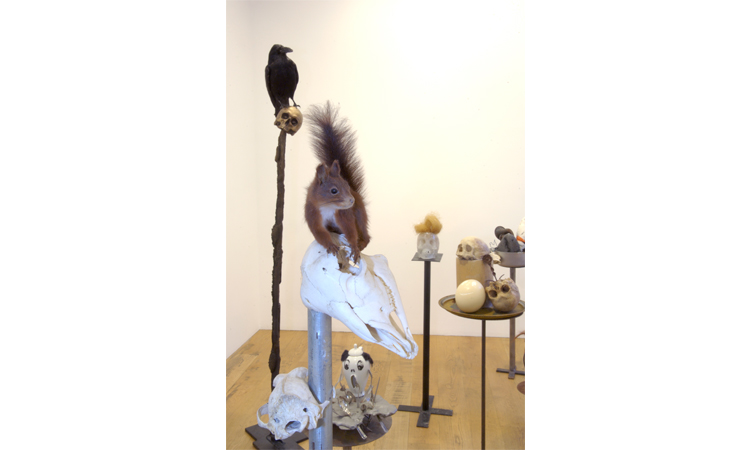 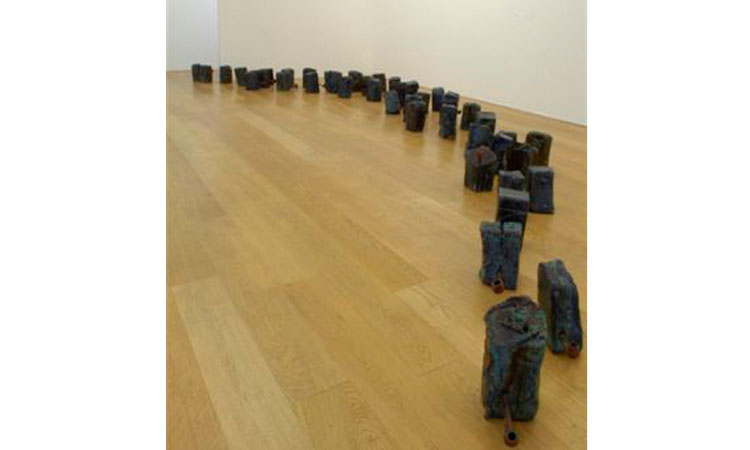 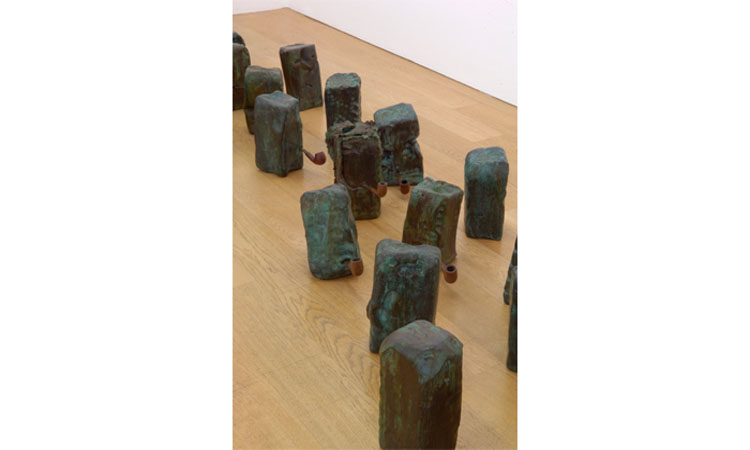 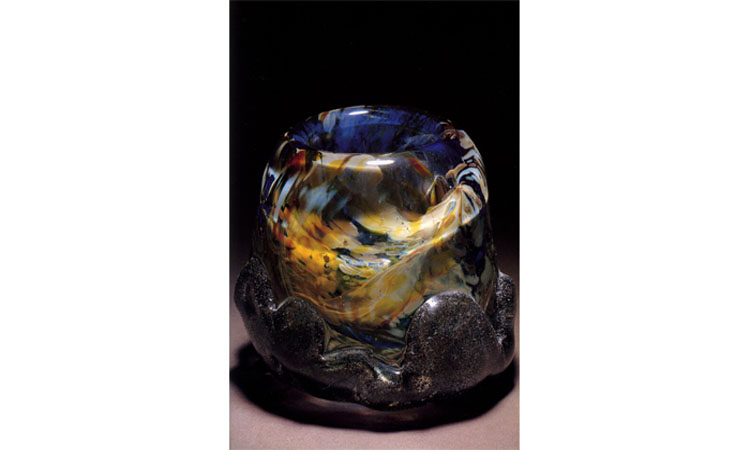 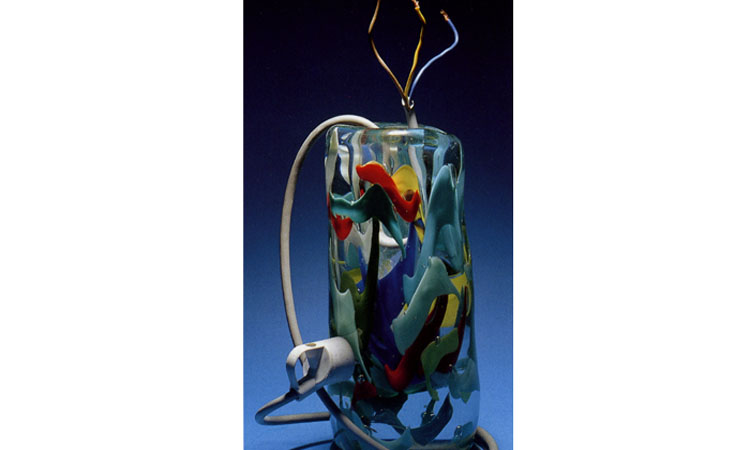 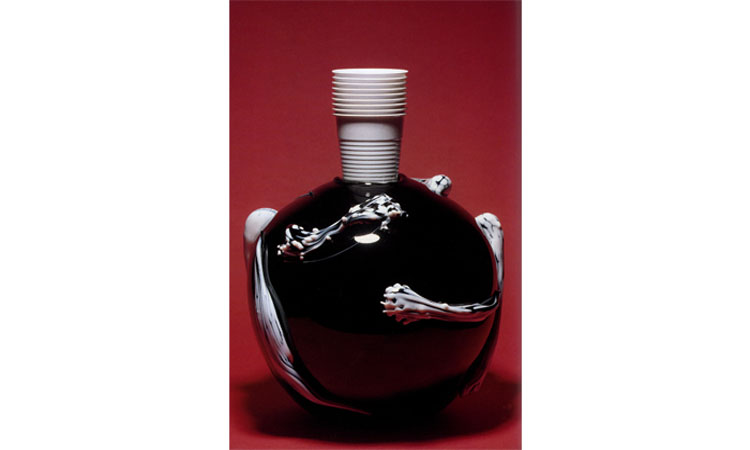 Expelled from his lycée at the age of thirteen for having "urinated on the Swedish flag", he attended a training course to become a goldsmith (1951-1952), and in 1953 had a life-changing meeting with Oyvind Falhström who was on the point of publishing his manifesto on concrete poetry.

In his early days, he used rébus (rejects) as much as rebus, diversion as much as recovery, and played with words and everyday objects. He devoured James Joyce's Ulysses, which perfectly tied in with his need to re-read the world. But he had two tutelary figures (not claimed): Kurt Schwitters and Marcel Duchamp. A conscientious objector, Erik Dietman left Sweden and arrived in France in 1959 where he met the supporters of the Nouveau Réalisme and Fluxus whose work was close in intent to his own

Then he became friends with Daniel Spoerri and Robert Filliou. However, Dietman was never a member of these movements. "More than two already makes an army", he used to quip to defend his independence. His individualistic attitude allowed him a disrespectful freedom from successive fashions.

Even though he did not join any of these groups, he did work and maintain very close friendships with some members of Fluxus and Nouveau Réalisme. He participated with the latter at the "Salon des Comparaisons" in 1965 and 1966. His friend, with whom to share his joie de vivre, humour and derision, was Roland Topor, whom he met in 1963. As early as 1962, Erik Dietman aroused great interest with his Objects pansés, Objects pensés. He would cover all kinds of objects with the aid of sticking plaster, an easily recognisable strip of adhesive tissue of a pink flesh colour. This bandage established a boundary between two realities, one of a physical nature and the other of a mental nature. For Dietman, this wrapping hid the better to reveal because the plaster both isolates the object from the environment and reveals its shape. It does not hide things but unites them, increasing their reality while maintaining their integrity. The wrapping gives a singularity to the shape of the object, eliminates its anecdotal side and stresses its details. It enables one to see it better by outlining the contours.

Erik Dietman then "bandaged" wood and cardboard, framed photographs, hid and masked words and sentences. The motley objects he manufactured are, in general, given names with double meanings, which thus gave them a new meaning. With this period of Sparadraps (or "poor man's bronzes"), Erik Dietman became, until 1967, the "king of sticking plaster", as he defined himself in a posture of self-deprecation. From 1966, he began Le Grand Livre Sterling, Rébus sur les vicissitudes d'une vie, a vast rebus consisting of objects, photographs and drawings, which he finished in 1976. The artist then made collages and assemblies with a variety of materials: he made several works in bread such as Pain, consisting of the word pain (intended also in the English meaning of the word), baked in real bread and Sac en pain, as well as mobiles. This was a period of intense work marked by a succession of numerous exhibitions in Europe.

From 1970, he removed an "n" from the end of his name and signed himself Dietman. In the 1970s, his work diversified and when he made "poem-paintings", it was an astonishing mixture of painting, knick-knacks and utensils. In 1975, he returned to France after several months abroad and settled in the Var. In the same year, the Musée d'Art Moderne in Paris presented his first retrospective in France, "Vingt années de sueur", which was repeated the following year at the Moderna Museet in Stockholm.

In 1977, Denmark awarded him his first public commission and Dietman took part in the "l'Ecole de Nice" exhibition on the occasion of the opening of the Centre Georges Pompidou in Paris. From the 1980s, he began his first modelings and these marked a turning point in his work. He embarked on an intense production of drawings and sculptures, impregnated with an ironic poetry and whose titles are full of puns. Bronze, marble, ceramics and glass became the materials used for works that were sometimes monumental, in which the themes of death and humour are very recurrent. In the 1980s, he also produced his Polaroïdioties (Polaroids of "everything and nothing") which he continued until 1993.

In 1989, he won the Grand Prix national de sculpture in France and in 1990 in Sweden, the Royal Academy of Fine Arts Award in Stockholm.From the 1990s, he began to show a more restless face, haunted by the obsession with creation. He was also a socially engaged individual, as witnessed by some works (Kosovo or Voyage organisé sur l'Adriatique). One of Erik Dietman's major works, which can be seen in the Tuileries gardens in Paris, is titled L'Ami de personne and dates from 2000. It is a monumental bronze sculpture, a giant figure, who seems to reach out for a small chair. At the end of his life Erik Dietman agreed to be a professor of sculpture at the Ecole Nationale Supérieure des Beaux-Arts in Paris and at the Stockholm Academy of Arts to strive to communicate to his pupils his enthusiasm and need to know the history of art and pass on his taste for drawing, to create with his hands